Please enter your e-mail address below to be notified when this product comes back in stock.
We will not share, rent, sell or use this e-mail address for any other purpose other than to tell you when the product is back in stock.
Free Shipping for minimum purchase of RM60.00 West Malaysia Only
Fun Facts About Chili Pepper 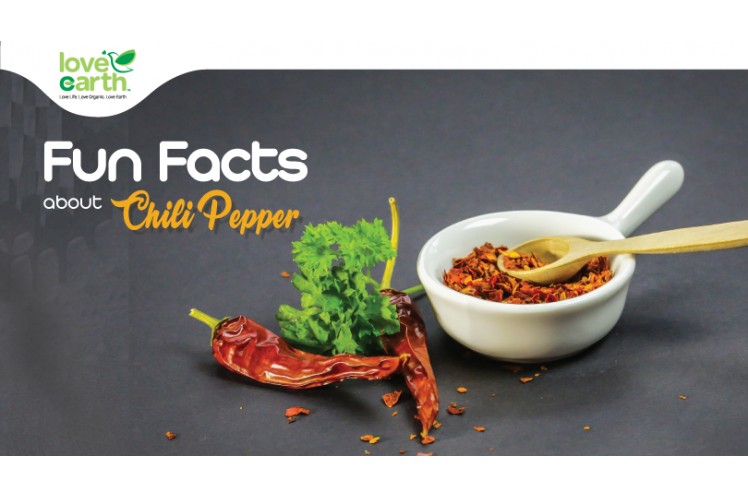 Peppers, or members of the genus capsicum (Chili), come in all shapes, sizes, colors and difference scale of spiciness. Beside what we commonly known, let’s learn more fun fact about Chili Pepper!

Only Mammal Are Sensitive to The Spice of Chili Pepper

While capsaicin (辣椒素) may burn and irritate the flesh of mammals, birds are completely immune to its effects. Unexpectedly, birds are actually the largely responsible for helping wild peppers spread by eating them and excreting the seeds.

All Bell Peppers Are Actually from Same Plants

Bell Pepper Can Be in Purple Color

What? Purple Bell Pepper?! Red, green, Orange, and Yellow bell peppers regularly line the produce aisle, but do you know the mild, sweet pepper can also be purple? When harvested in the early stages of maturation—before developing any yellow, orange, or red spots, bell peppers can be a beautiful shade of Aubergine, with striking white or lime green interiors. Interesting!

Most people may think of Oranges as the best source of Vitamin C, but other than Oranges there are actually a lot option that can beat its supply. Chili peppers, for example, have about 107 mg of the Vitamin C compared to an Orange’s 69 mg.

Eat A Pepper When We Have A Stuffy Nose

This sounds like a challenge! In addition to making our tongue hurt, capsaicin can also help us to unblock our sinuses. While this is not a good fix if we are having trouble breathing when we are having stuffy nose. A spicy pepper can help open things up and relieve congestion. The peppers keep our mucous thin, and as a result, lower our chances of a sinus infection.

Cayenne Pepper Can Be Use for First Aid

This is a popular natural remedy, when applied topically, cayenne pepper can help stop bleeding. The cayenne can either be sprinkled on the injury directly or diluted in water and soaked into a bandage. Anecdotal evidence suggests that the powder helps equalize blood pressure, meaning less blood will pump out of the wound and it will clot faster. Some even believe that the pepper will help alleviate pain which is something that normal bandages can’t do.