Please enter your e-mail address below to be notified when this product comes back in stock.
We will not share, rent, sell or use this e-mail address for any other purpose other than to tell you when the product is back in stock.
Free Shipping for minimum purchase of RM60.00 West Malaysia Only
Essential Spices for Successful Indian Dishes 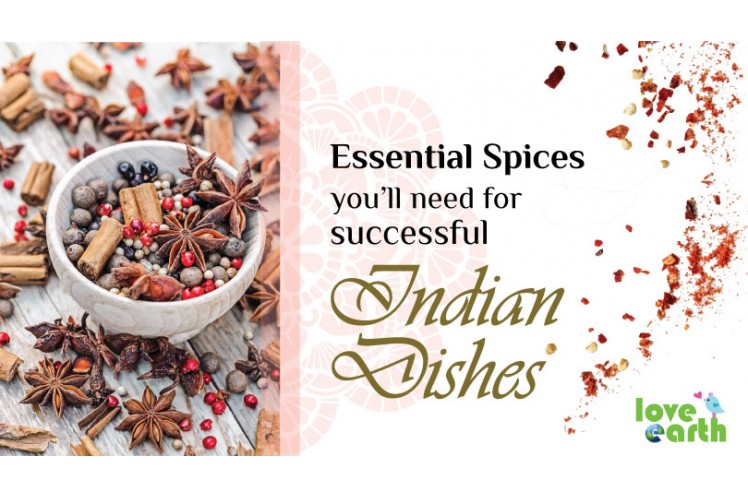 Indian food is a delicious mix for the senses: tantalizing aromas, vibrant colors, and of course those spicy, sweet, tangy flavors. But for the home cook, this cuisine can be daunting. When we look at what’s needed to cook most Indian recipes, it’s easy to be put off by the long list of spices required.

Many Indian curries call for their strong, aromatic spice. We can find it as seeds or toasted and ground. (We can also buy in seed form and ground them when we need it!) As for its flavor, people often describe it as “warm and earthy” as well as “slightly bitter.” Like most Indian spices, it plays well with others.

The plant’s seeds and leaves feature in Indian cooking as a spice and also a garnish. Described by some as “nutty” and “fruity,” coriander seed is a key element in garam masala. It’s believed to settle an upset stomach and be good for digestion, too.

Mustard flavoring appears in cuisines around the world. Black mustard seeds are stronger in flavor than the yellow or white ones, which are used to make the yellow mustard that’s stocked in many American fridges. There’s also a brown mustard seed. For Indian meals, toss the seeds in a little hot oil until they pop and split, releasing their peppery, rich flavor. Use the oil, with the popped seeds, to flavor soups and vegetables. Put mustard seeds in a tightly sealed container and store them in a dark, cool, dry place.

Fresh ginger gives delicious, peppery flavor to recipes. If we leave it exposed to room temperature, ginger spoils pretty quickly, so try this trick: Wrap a chunk of peeled ginger root tightly and store it in the freezer; we can grate what we need right into the pot.

This is a blend of spices that varies according to cook and region of India, but it is a staple of Indian cooking the way that herbs de Provence functions in French cuisine. We’ll want to add this to the pan when the recipe is almost finished so the fragrant flavor doesn’t cook off or turn bitter. Garam Masala include cumin powder, coriander powder, cardamom powder, black pepper powder, cinnamon powder, cloves powder, nutmeg powder.

This vivid yellow spice gives many Indian dishes their characteristic color.  A relative of ginger, the spice is known for its anti-inflammatory properties as well as its valuable work as a flavor and color additive in curries.

It’s not just for apple pie. The spice adds a delicate sweetness to savory recipes as well as desserts. Ceylon cinnamon (or “true cinnamon,” seen above) is the real deal, and we pay more for it than for cassia, which is a cheaper relative also known as cinnamon. If we buy supermarket ground cinnamon, we can’t tell which type we’re getting, so it’s good to order from a company that distinguishes between the two. Cassia has a stronger, spicier flavor. Ceylon cinnamon is credited with being antioxidant-rich and good for reducing cholesterol and stabilizing blood-sugar levels—all that and great taste? It’s a win-win.

Cardamom is a “less is more” spice: Use with caution, or it can mask milder flavors in your dish. This is one spice we should keep in the freezer—it loses freshness quickly. Alternatively, we can buy then in whole pods and grind them when a recipe calls for cardamom. Chai, curries, and rice dishes all get a flavor boost from cardamom.

Various chili peppers rack up the heat in curries; we can adjust quantities to taste. Cayenne pepper is one type of chili pepper that’s easily sourced in supermarkets, but we can also use fresh red chili peppers if we prefer.