Please enter your e-mail address below to be notified when this product comes back in stock.
We will not share, rent, sell or use this e-mail address for any other purpose other than to tell you when the product is back in stock.
Free Shipping for minimum purchase of RM60.00 West Malaysia Only
Can Lactose Intolerance People Drink Milk? Drinking milk has always been associated with having strong bones and teeth. In early 2000, my mom tried to include my milk consumption by giving me cereals drenched with milk. This particular meal always left me wanting more due to the sugary kick off the meal. The addition of milk also left a nice aftertaste in my mouth. However, along with age, I always listened to people around me saying that they could no longer enjoy milk as opposed to what they had always experienced during their childhood. Their stomach will start rumbling, and the urge to go to the toilet heightens after consuming milk. Thus, why is this happening specifically to adults? Can people with lactose intolerance drink milk? Continue reading to know more about this.

The second type of lactose intolerance occurs due to infectious or inflammatory diseases that could cause injury to internal mucosa. Some common causes that could lead to this second type are the intake of antibiotics, celiac disease, chemotherapy, and so much more (5).

The third type of lactose intolerance comes from congenital, which means that this condition is present from birth. Mothers could observe this condition as soon as newborns ingest milk for the first time (6). 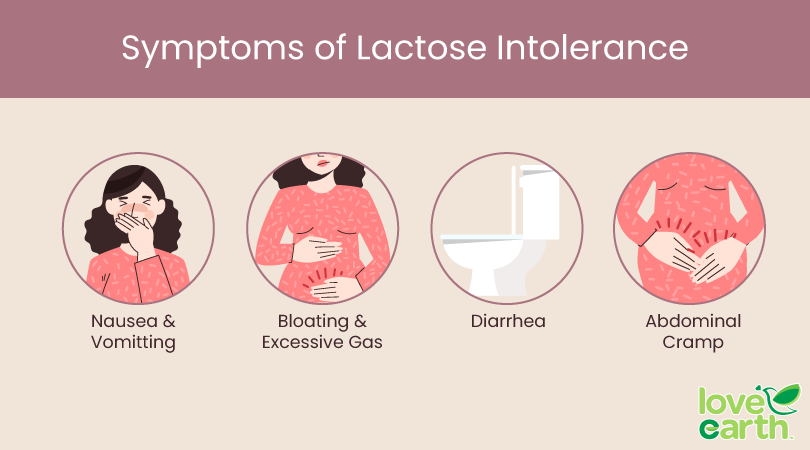 These symptoms could be observed from 30 minutes to 2 hours after consuming milk.

As for now, there has been no cure for lactose intolerance. However, the symptoms could be lessened and avoided if one takes care of their daily diet. One could start to eat lactose-free food. For example, substituting dairy products and cow-based milk into plant-based milk such as soybean and almond milk. So the answer is yes. Lactose intolerance, people can still enjoy milk as long as it is free and lactose and, better yet, a plant-based one.

One of the plant-based milk that is suitable for lactose intolerant people is soybean milk. Soybeans, high in vitamins and minerals, lack cholesterol but contain important monounsaturated and polyunsaturated fatty acids like linoleic and linolenic acids. Products made from soy are abundant in bioactive substances, particularly isoflavones, which positively affect health and increase protection against deadly diseases such as cardiovascular disease, cancer and much more. Soy milk includes a lot of nutritional compounds, is highly digestible, and is inexpensive without lactose or cholesterol (7).

Other than soy milk, another option that could be considered is milk from nuts such as walnuts, almonds and cashew. Almonds are the most common nut used to create nut milk. The first step in making almond milk was to heat almond powder in water to 90°C. The spinning technique of centrifugation is used to remove large particles. The texture and appearance of the almond fluid are homogeneous after homogenization, resembling those of cow's milk. Even though it resembles cow's milk, almond milk lacks lactose, making it suitable for lactose-intolerant people. Almonds provide many nutrients, including fibre, phytochemicals, vitamins, and vital fatty acids, besides having minerals like calcium, potassium, phosphorus, magnesium, copper, and zinc (8).