Please enter your e-mail address below to be notified when this product comes back in stock.
We will not share, rent, sell or use this e-mail address for any other purpose other than to tell you when the product is back in stock.
Free Shipping for minimum purchase of RM60.00 West Malaysia Only
5 Foods That Can Make Autism Worse

Autism or autism spectrum disorder (ASD) is a complex developmental disability that typically appears during the first 3 years of life due to a neurological disorder that affects brain function. It is 4 times more prevalent in boys than in girls. The condition is associated with an array of challenges, including abnormal social skills, developmental delays, communication problems, and behavioral issues.

Not just that, children with autism are 8 times more likely to have gastrointestinal problems than non-autistic children. All of these complications and symptoms can range from mild to severe; the severity may be influenced by food.

These are the 5 foods that can make autism worse and should be avoided: 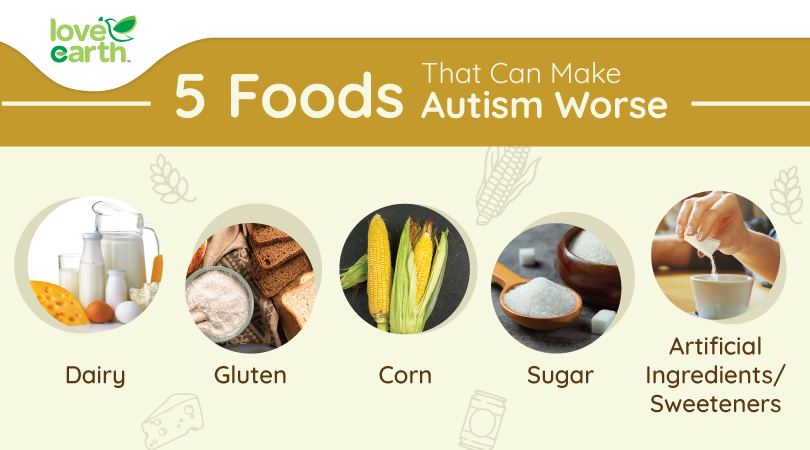 When casein (a type of protein found in dairy products) mixes with stomach acid, it produces exorphin. Exorphin will result in myriad troubles such as brain fog, spaciness, inability to concentrate, and numbness to pain.

Corn has the most unhealthy fatty-acid profile of any grain. According to USDA, corn has been the top pesticide-using crop in the nation. A study in 2013 suggests a potential link between exposure to this herbicide glyphosate and the risk of autism.

Sugar is addictive, increases brain inflammation, hurts the gut, and causes erratic brain cell lining. Research has shown that children with autism who also suffer from gastrointestinal distress have poor metabolism of sugars.

Artificial sweeteners can damage brain functioning and increase the risk of dementia, metabolic syndrome, diabetes, heart disease, and others. Besides, a study in 2019 indicates the spike in autism may be connected to the preservatives found in processed foods.

In conclusion, avoid these 5 types of foods if your children or those with ASD improve their overall health!

Bachelor of Science Degree in